Coordinated activation of rhythmogenic networks in the spinal cord

The hindlimb locomotor CPGs of the rodents are distributed along the thoraco-lumbar segments of the spinal cord. We found that an additional rhythmogenic network resides in the sacrocaudal segments of the spinal cord. This network controls the axial and tail musculature of rodents. It is tightly coupled to the locomotor pattern generators to ensure body stabilization during movements. The rostrocaudal coupling between the locomotor and body-stabilizing networks is mediated by propriospinal/descending neurons, the axons of which travel through the lateral (VLF, LF and DLF) and ventral (VF) white matter funiculi. Caudo-rostral coupling between the two networks was found during noradrenergic activation of the sacral segments. This coupling accounts for an increase in the excitability of rostral lumbar motoneurons and the resultant increased probability for their recruitment 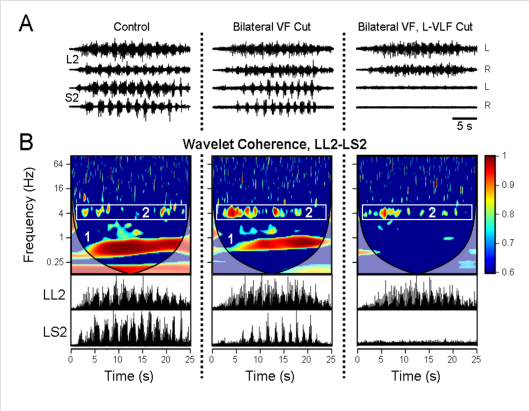 Afferent input has been shown to play a major role in our capacity to reactivate spinal circuits that generate coordinated rhythmic flexion and extension of the limb muscles in spinal cord injury patients. Our studies revealed that stimulation of sacrocaudal afferents (SCA) is a potent means for activating the locomotor central pattern generators (CPGs) in rodents spinal cords that lack the descending control from the brain. These studies showed that capacity of SCA to induce the locomotor rhythm depends on activation of sacrocaudal neurons the crossed and uncrossed projections of which, ascend through the ventral and lateral white matter funiculi (VF,VLF, LF, and DLF) to the limb innervating segments of the cord. The project examines the axonal projections, spatial distribution, organization and physiological properties of these sacrocaudal neurons and evaluates their role in the generation of afferent induced rhythmicity in the spinal cord. The studies are performed in collaboration with Dr. L. Anglister and E. Finkel, from our department and with Drs. M.J. O'Donovan and G. Z Mentis from the NINDS, NIH, USA. (Anglister et al. 2008, Lev-Tov and O'Donovan 2009, Lev-Tov et al. 2010, Etlin et. al. 2010)

The coordination of locomotion by the central nervous system depends on proper wiring within and between interneuron populations that make up the complex spinal neuronal networks and on the processing of the multimodal sensory input delivered via afferent neurons to these networks. Genetic studies revealed that at least 8 different groups of interneurons develop from the dorsal aspect of the embryonic neural tube. These dorsal interneurons (dIN) mature to form the various types of tract- and propriospinal neurons that are critical for sensory-motor integration in the central nervous system. The goal of the project is to determine the functional connectivity of known types of dINs and examine their role in the neural control of movements. We use gene targeting and optogenetics as means for tracking and manipulating, activating and silencing identified subpopulations of spinal interneurons that are required for activation of spinal neuronal networks and for sensorimotor integration. This project is done in collaboration with Prof. A. Klar and Y. Hadas in our department (Hadas et al. 2011, Etlin et al, 2011). 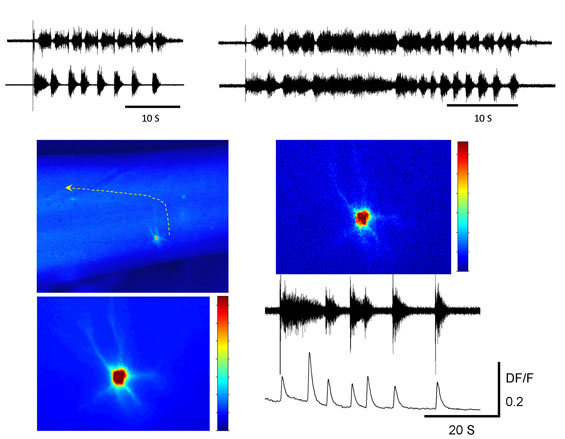 The detection of firing patterns embedded within a complex nonstationary signal and noisy background activity is crucial for the interpretation of electrophysiological recordings from the brain, spinal cord, and the neuromuscular system under normal and pathological conditions. In a recent work we have used Wavelet Transformation (WT) for the analyses of non-stationary patterns produced by the mammalian spinal cord preparations (Mor and Lev-Tov, 2007, Etlin et al, 2010). The WT WT/coherence algorithms enable us to characterize the dynamic profile of the rhythmic signals, to assess the linear relation between spectra of any given pair of variables, and to uncover and extract hidden components of the rhythm in the time/frequency domain. These algorithms are integral parts of "Spinalcore" a menu-driven statistical package we developed. The computational efficiency of "Spinalcore" is now improved by graphical processing units (GPUs) based parallel computing (Mor et al. 2011). The use of "Spinalcore" is expanded these days for the detection and analysis of pathological and pathophysiological activity of the central nervous system. 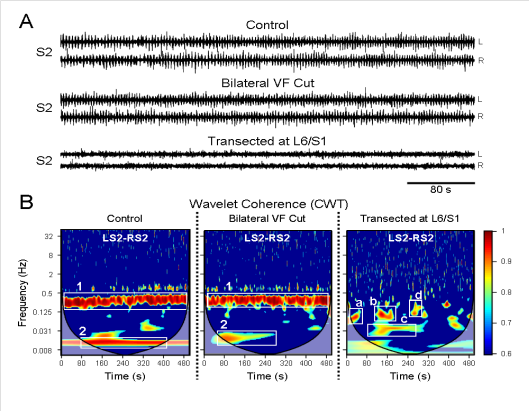 The capabilities of the WT time series modules of "Spinalcore" to decompose non-stationary signals in the time/frequency domain are exploited in this project for studying the pathophysiology of different forms of spastic activity in spinal cord injury patients during body weight supported (BWS) treadmill locomotion using driven robotic gait orthosis. The studies are aimed at reducing the occurrence of the spastic episodes and enhancing the motor capacity of the patients, are performed in collaboration with Dr. G. Zeilig and B. Shamir from the Department of Rehabilitation Neurology at the Sheba Medical Center, Tel Hashomer. 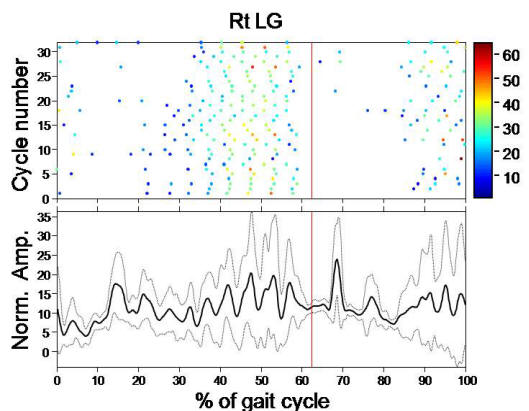